Psychology: Why Number 7 is the Luckiest 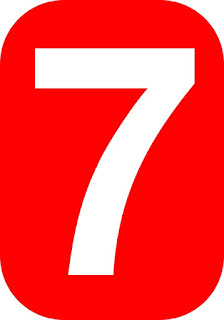 Surely a number is a number?

They should represent the number of something. One apple, two pairs, three wise men...

However, we know that numbers aren't just numbers, hey? That's why you have your favourites, dislike others or superstitious of some.

When a feeling is evoked from a number... it isn't just a number any more.

If I asked you to name an unlucky number it would most likely be 13. Although this may vary from country to country. It is considered luck in Italy.

As detailed in our previous article: Fear of Bearded Men and the Number 13. Research has shown that one in ten people are superstitious about the number 13.

What about Friday the 13th. Spooky. Known as Paraskevikdekatriaphobia, it has a fear strong enough to keep some people in bed all day.

Number 7 is considered 'lucky'. When you ask someone to pick a number from 1 to 10 number 7 is chosen most often. The extremes 1 and 10 are neglected, the even numbers have too much of a recognisable patter, while number 5 is too obvious being positioned in the middle, that leaves 3, 7, 9. With 9 being close to the end, and 7 seeming more obscure than 3 it is chosen most often.

A survey of 40000 people found that number 7 was closely followed by number 3. it shows the perception people have with numbers.

Lucky number 7 is reinforced in western culture seen on slot machines and at casinos (777).
Photo: Pixabay free for commercial use and no attribution but given
Email ThisBlogThis!Share to TwitterShare to FacebookShare to Pinterest
Labels: 7, number 7, numbers, seven, superstitions
Newer Post Older Post Home