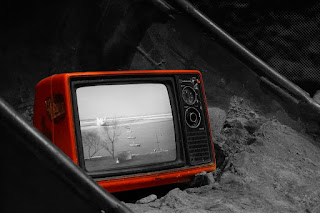 Have you ever been to the bookmaker and noticed an awkward silence? Perhaps you won a bit too much money and along with a loss of wedge the bookmaker gave you the cold shoulder. But how long did it take you to feel something just wasn't right? If you had a stopwatch, what number of second would pass before you pressed the stop button feeling kind of awkward?

Supposedly, an awkward silence can be felt after just 4 (long) seconds. It doesn't seem quite long enough but that's what they say.

Television. Who doesn't enjoy watching TV? The box in the corner. Nowadays like a cinema hanging on your wall. Where would we be without that box of delights? Psychology has a lot to say about TV. You name it, there is research about this, that and the other. But what does it say about people who love too much TV? How many hours a week do you watch TV? I seem to be watching less and less so it may be saying something positive about me. So what does it say? Here goes. It's said, unhappy people watch more TV.

When was the last time someone gave you a smile? I guess it wasn't the bookmaker who you won all that money. Not the TV addict who was too busy watching a ''gripping'' episode of Emmerdale. Why should they even think to smile. Not only should you enjoy receiving a smile but giving them too. Research shows that smiling can make you feel happier.

If you are watching TV in the same room as someone and feel an awkward silence coming on, switch it off, look at the person, and smile. The world is feeling a happier place, hey?